The history of all tartan is steeped in myth and controversy, and none more so than the particularly colourful plaids associated with the MacMillans.

The earliest tartans represented localities rather than clans - as noted by Martin Martin on his travels around the Highlands and islands in the late 17th century: "Every Isle differs from each other on heir fancy of making Plads as to the stripes in breadth and colours. The humour is different through the mainland of the highlands, in so far that they who have seen those places are able at first to view the man's Plad, to guess the place of his residence."

Uniform tartans began to appear in the 18th century, in the first decade of which the Laird of Grant is reported to have ordered 600 tenants to arms "with Tartane Coates all of one colour and fashion". In the 1720s a standard blue, green and black plaid was used to equip government soldiers in the Highlands, including the "Black Watch" - which in due course became the name of a pattern which formed the base for many later regimental and clan tartans, including the Hunting MacMillan.

The Hunting is one of the three basic MacMillan tartans: Dress, Hunting, and Ancient. Each one can be varied according to the type of dye used, so becoming Dress/Hunting/Ancient in "Modern Colours" (made with bright chemical dyes) or in "Old Colours" (made with less vibrant vegetable dyes). Another, increasingly popular, variation are the "Weathered" forms, which are said to represent the tartan after it has been buried in a bog (thus leaching out the brighter colours) as is supposed to have happened in the Highlands in the second half of the 18th century when the wearing of tartan was made illegal for about four decades.

A fourth tartan, named for the Clan MacMillan Society, existed for a while, but is no longer made (it was similar to the Ancient but with a more symmetrical pattern). 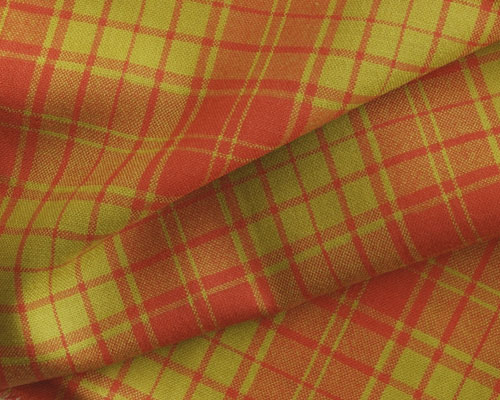 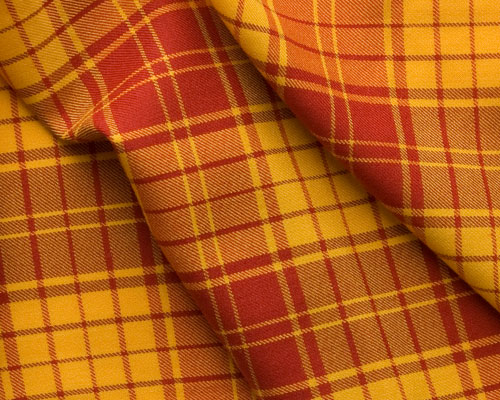 As Chris McMullen has shown in his authoritative booklet The MacMillan Tartans: Na Buidhe agus na Dearg (The Yellow and the Red), the oldest of the MacMillan tartans is the Dress. It was not however granted to the clan by King Robert the Bruce after the battle of Bannockburn, as some apocryphal accounts of the clan's history have reported (tartans may not have been worn at all in the 14th century and it's debateable whether the MacMillans were at Bannockburn - and if they were, on which side they would have fought). The date of its origin is unknown, but it existed in 1874 when a bolt of it was taken to New York by a family of MacMillans emigrating from the island of Islay. It was not popular amongst some members of the clan, including the first Chieftain elected by The Clan MacMillan Society in 1893, who said in his inaugural address:

"There is only one thing we have to find fault with in connection with our clan, and it is its tartan. Very few people have ever seen it, and those who have do not admire its discordant combination of yellow and red checks and stripes. I am glad that a member of our clan has remedied this defect and has patented a hunting form of our tartan which is as harmonious as it is elegant and appropriate."

During much of the 20th century the only commercially available versions of the Dress featured red colours that looked more like orange and yellow colours that had a distinctly green tinge, so it remained rarely seen. However, its popularity has surged in recent decades, especially in North America, following the rediscovery and reproduction of the original 1874 version, with its true red and gold colours. 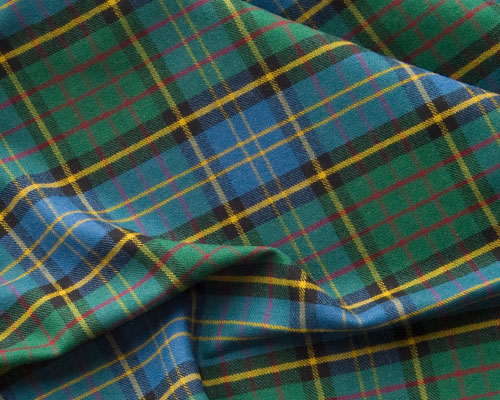 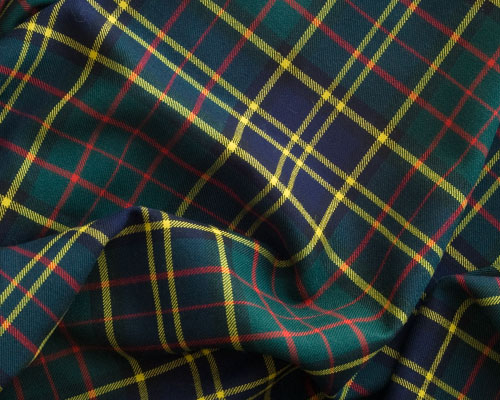 The "Breacanseilg-mhicghillemoil" or Hunting MacMillan Tartan was patented in the early 1890s by Donald MacMillan, a founding father of The Clan MacMillan Society, who was a draper in Partick, near Glasgow. His design was described in the 1950s in Donald Stewart's Setts of the Scottish Tartans:

"The modern Hunting Tartan results from the super-imposition of red and yellow lines from the red-yellow design in the conventional blue, black and green basis of so many dark tartans. The device is ingenious and the result satisfactory."

Though the Hunting was overtaken in popularity for much of the 20th century by the Ancient MacMillan, it remained the personal choice of what was to become the chiefly family of Clan MacMillan. As a child, the future Sir Gordon MacMillan had a dressing gown of the Hunting Tartan (in Modern Colours), and when he gave his son George his first kilt in 1939 it was also in the Hunting MacMillan (in Old Colours). It's use by the chiefly family has now made it perhaps the most popular MacMillan tartan in the UK, where many appreciate its less brash colours. The recent creation of a Weathered Hunting adds an even more muted version of the Baillie's original creation. 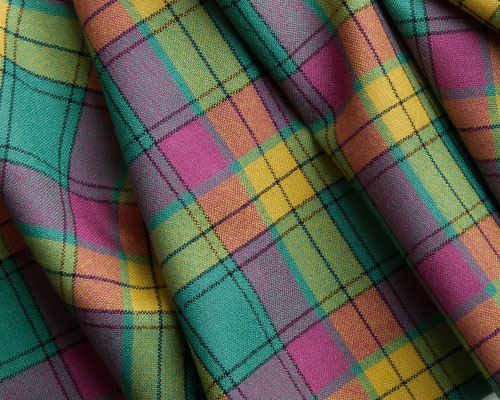 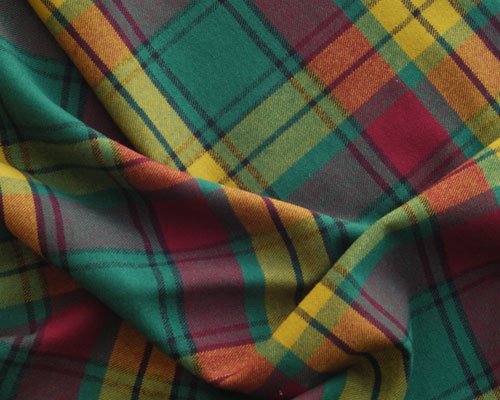 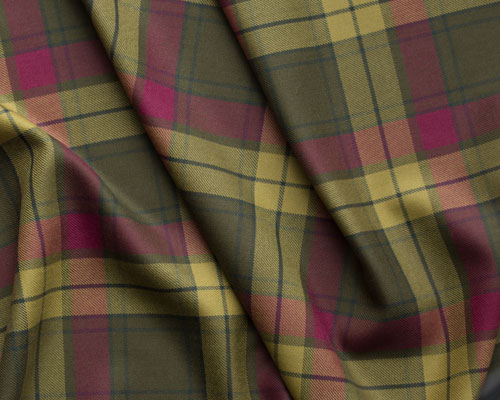 The Ancient (or Old) has been called "The People’s Choice" amongst MacMillans, and remains perhaps the most widely worn of the clan’s three tartans in North America. It was created by tartan weavers in the early 20th century who based it on the famous McIan print showing a MacMillan warrior fighting a Cromwellian soldier.

When McIan did his original illustration in the 1840s, before there was a Clan MacMillan Society, many MacMillans belonged to the Clan Buchanan Society and wore their tartan. It was a version of it therefore that McIan had his MacMillan wearing, while his Buchanan wore the version with a white stripe that has since become the most common tartan of that clan.

The Ancient in Modern Colours can be very bright, while the Weathered version, which has become popular in recent decades, makes for a pleasantly muted contrast.

The "Modern Black MacMillan" is a recent invention available from some weavers and is not currently recognised as an official Clan MacMillan Tartan.

Tartans not recognized by Clan MacMillan - a note by Chief George MacMillan.

Because one of the main purposes of tartan-wearing is to identify the wearer as a Clan member, and since we already have three distinct tartans in several colour variations ("old", "new", "weathered" etc.), we suggest that those intending to dress identifiably should choose one of the traditional setts: Dress, Hunting, or Old/Ancient MacMillan. It is true that tartans in their present form are all comparatively recent in their origins. Anyone wishing to wear some other variant of "MacMillan" ought not to be discouraged, as long as they understand they are not wearing a tartan that recognisably identifies them with our clan. Who am I to stickle for tradition? The Hunting tartan worn by all my father's descendants, was devised about the time he was born (1892), by a President of the Clan MacMillan Society, carefully revising the original "Dress" tartan with a standard "Hunting" background and cleverly attesting our clan's connections with Lochaber, the Clan Donald, and the Cameron Highlanders. Others may choose to make variations today. While they should not be thought of as Clan MacMillan tartans proper (as they have not been recognized by either the Clan Society, or the Chief), such variations are always welcomed and appreciated at MacMillan gatherings.

Dying for a different tartan?

All tartans can be varied considerably by the use of different dyes and setts of various sizes, and each of the companies weaving tartan today have their own versions of the standard clan tartans. Most manufacturers produce versions using modern chemical dyes, which tend to be darker (or brighter, depending on your point of view!) and which are therefore called "Modern" or "New" colours, and versions using vegetable dyes, which tend to be lighter (or less bright) which they call "Ancient" or "Old" colours. These alternative names for the versions made with vegetable dyes can cause considerable confusion and lead to names such as "Ancient in Old Colours" or "Old in Ancient Colours", which for the sake of brevity - and maximum customer confusion - often come out as the "Ancient Old" or "Old Ancient". It's always wise therefore to ask for swatches (samples) from each shop or weaver before ordering any tartan, so you know exactly what you're going to get.

Tartan for sale from the Clan Centre

The Clan Centre at Finlaystone, Scotland now has two pure-wool tartans in stock: MacMillan Hunting Old and MacMillan Ancient Old. Both are what weavers call "lightweight", 10 oz per yard (or 400/410g per metre) costing £52.00 per metre 150cm (60 inches) wide. While not heavy enough for a kilt they are perfect for lightweight skirts, waistcoats, sashes, children's clothes and home furnishings. For further information, UK and international orders, contact by email or telephone 0044 (0) 1475 540 285.

Baxter, Bell and Blue tartans
These have been commissioned in recent years by North American bearers of these M’millan septnames - or their organisations - and can most easily be obtained in the USA, though the Clan MacMillan International Centre (CMIC) does possess samples of them for exhibition to visitors.

Old, Modern or Weathered?
Each of the basic tartans can be produced in a variety of forms depending on the dyes used - the main variations being:

Weathered or Muted
Using less colourful - often grey/brown - dyes, supposed to represent the result of being buried in a bog when tartan was illegal in Scotland.

The size of the sett (the unique pattern of each tartan) can also vary - as can the sort of cloth being used - so all tartans can appear in many forms. Above is an example of MacMillan Hunting Old in two different sett sizes. It also illustrates colour variation, both being MacMillan Hunting Old but varying in colour.

The MacMillan Tartans: Na Buidhe agus na Dearg by Rev. Chris McMullen is the most current and detailed book on MacMillan tartan. It is available from the CMIC for £3 plus packaging and post (P&P). From the author (in Saint John, Canada) $6 Canadian or $5 American plus P&P. Please contact either by email to determine the total price and order.