Emigration. M'Millans in the Scottish Diaspora.

Even before the "Scottish diaspora" MacMillans were among the most scattered of Scottish clans, residing in the Highlands, Lowlands and Ireland simultaneously (see a map of Clan MacMillan lands in Scotland). Migrations to North America were followed by those to the British colonies of Australia and New Zealand further scattering Scotland's emigrants. Following are brief overviews (roughly chronological) addressing Scottish emigration.

A William McMillan is mentioned on the manifest of one of the ships transporting Covenanters, "The Henry and Francis".

Since "The '45", Scots in general had benefited from the expansion of the British Empire, taking a disproportionately large role in the hierarchy of the imperial economy, government and military. Most Lowland expatriates, the least populous and least cohesive of these groups, were integrated into the English-dominated coastal population of the colonies. Many were involved in the tobacco trade of the ports of Virginia. Charleston, South Carolina had a professional caste of Lowlanders: merchants, doctors and administrators. Many Presbyterians served in a military capacity in Darien, Georgia guarding the frontier with Spanish-occupied Florida. An exception to this rule, and possibly the earliest sizable Scottish migration was approximately a thousand Covenanters transported to Perth Amboy, New Jersey in 1685, having refused to take the oath of allegiance to the Crown.

Scots-Irish: from the Lowlands to the American Colonies via Ulster.

Also known as Ulster Scots, they resided in Northern Ireland, primarily descended from Presbyterian Scottish Lowlanders, though some were Quakers, mixing with English Puritans and, later in the 17th century, a wave of dispossessed French Huguenots. See a map illustrating Pre-Revolutionary Scots-Irish and Highlander migration.

One such immigrant was Alexander McMillan (1749-1837) from County Derry, Ireland. Immediately upon landing in Boston in 1775 he enlisted in the Patriot army, joining the invasion of Canada. He was to serve the cause through the Battle of King's Mountain in 1780. Soon thereafter he moved near Knoxville, Tennessee where his house still stands, listed on the National Register of Historic Places.

Said to be the second largest European migration to North America before the 19th century, they would have emigrated to North America as families or individuals. The initial wave of Ulster Scots to the New World was to Puritan-settled New England. Presbyterianism and Puritanism shared common roots in Calvinism. However, the Scots-Irish inability to conform to rigid Puritan societal and religious norms provoked disapproval from intolerant Puritan leadership and were subsequently turned away. Thereafter they were welcomed by William Penn's Quaker Pennsylvania through which the bulk of Scots-Irish would immigrate, eventually filtering down the eastern flank of the Appalachian Mountains as far as Georgia.

Estimations of Scots-Irish immigrants from 1717 to 1775 range from 250,000 to 400,000, making this by far the largest pre-Revolutionary Scottish-descended migration to North America second only to the English. One may therefore infer the largest number of M'Millan immigrants were Scots-Irish.

John McMillan, believed to have been born in Lochaber, Scotland, enlisted in the 78th Fraser Highlanders Regiment in 1757 serving with Gen. Wolfe’s British Army in Canada during the French & Indian War. In 1773 John and many of his extended family, the "Corriebuigh McMillans" emigrated to the Mohawk Valley of New York. Remaining loyal to the Crown during the American Revolution they were driven from their land and were interned for the duration of the war. Repatriated in 1783, John immigrated to Northern Ireland then re-immigrated to Canada.

Highlanders tended to retain their family and clan bonds when they left for the New World, sometimes emigrating in groups numbering in hundreds under the leadership of tacksmen or other former clan leaders. Often illiterate and speaking only Gaelic, it was therefore important that Highlanders went to established settlements of their own kind. Beginning as a trickle of in the early 18th century, the migration gathered speed after the Jacobite Rebellion of 1745-6 with the flow peaking in 1775.

Cape Fear, North Carolina was the largest concentration of Scottish Highlanders in North America before the Revolution. The "Highland Grant" in Mohawk Valley of Upstate New York saw concentrations of retired veterans of the Highland regiments that participated in the French & Indian War. Sir William Johnson settled Highlanders near what was to become Johnstown, New York. See a map of Highland routes and settlements in Pre-Revolutionary America.

The American Revolution and its impact on Scots in North America.

The American Revolution was a watershed not only for American Scots but those of Canada. Textbooks present simplified, ideological motives for the rebellion of the North American colonies to British rule. The Scots-Irish tended to support the Patriot cause, becoming the mainstay of the Patriot army. Highlanders and Lowlanders leaned toward Loyalism. These loyalties were by no means universal. Individuals responded relative to region, profession, economic climate, religion and, as in the backcountry, even local feuds. Self-interest was generally a more common motive than ideology. There was also a large swath of the population who preferred neutrality (one estimation has nearly half the population included in this category) including pacifist Quakers and many Highlanders. For their loyalty to the Crown (real or perceived), large numbers of Lowlanders and Highlanders were forced to immigrate to Britain's other colonies. While some of the refugees from Cape Fear immigrated to Florida and Britain's Caribbean colonies, the vast majority went to Canada, in particular Nova Scotia. Many Highlanders of the northern colonies, in particular New York found their way to Canada.

Scottish immigration to the American Colonies was reduced to a trickle at the outbreak of war in 1775. Emigration thereafter focused on Canada. Highlanders, victims of the Clearances, followed American expatriates to the Maritimes and westward. See a map of Highland immigration to Canada.

More in-depth pages specific to Lowland, Highland and Scots-Irish immigration to the American Colonies are in the Members' section of this website under "Emigration" under the "Members pages" dropdown menu. In due course additional content for this page will address immigration to Canada, Australia and New Zealand. 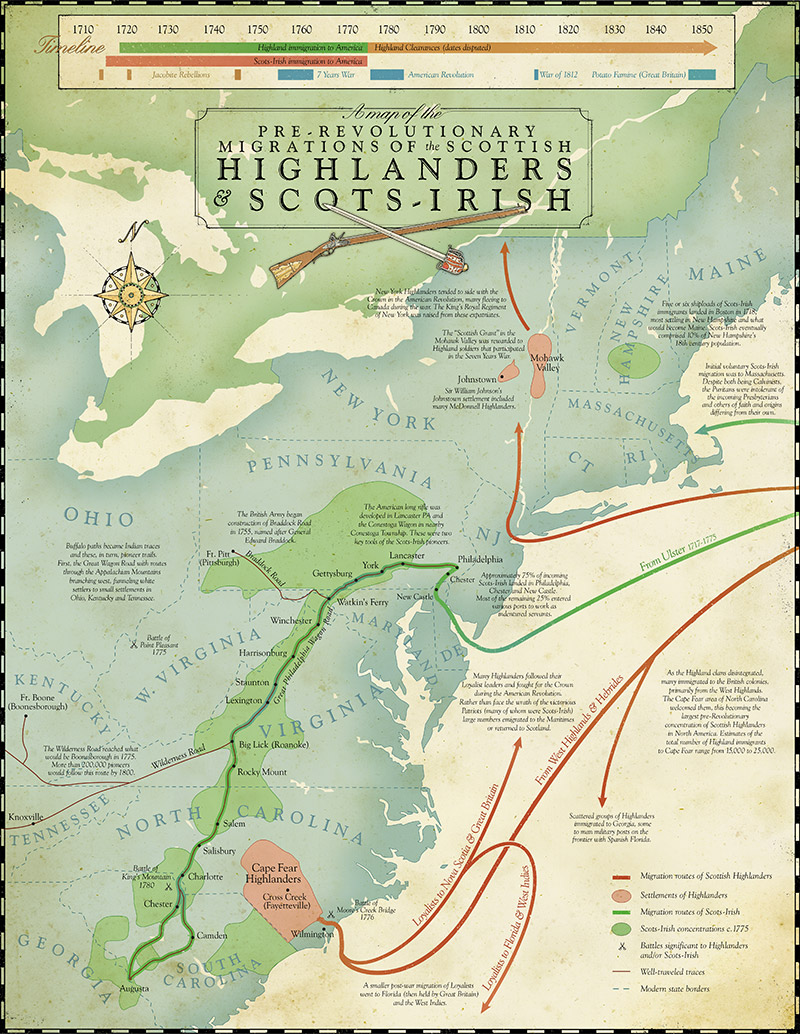 A map of pre-American Revolution Scots-Irish and Highland routes and settlements. This is available as an archival print.

A map of Scottish Highland immigration to Canada. This is available as an archival print.