This jQuery slider was created with the free EasyRotator software from DWUser.com.

Use WordPress? The free EasyRotator for WordPress plugin lets you create beautiful WordPress sliders in seconds.

The MacMillans are one of a number of clans - including the MacKinnons, the MacQuarries, and the MacPhees - descended from Airbertach, a Hebridean prince of the old royal house of Moray who according to one account was the great-grandson of King Macbeth. The kin of Airbertach were closely associated with the Clann Somerhairle Ri Innse Gall ("Kings of the Hebrides"), the ancestors of the MacDougalls and the MacDonald "Lords of the Isles"; and like their allies their interests in the twelfth and thirteenth centuries ranged throughout the Hebrides and the western coastal regions of the Scottish mainland, and into Ireland.

Though most of the clans certainly descended from Airbertach were associated with the Inner Hebrides (Tiree, Iona, Mull, Ulva and Colonsay) some others claiming the same descent were later settled inland along the strategic corridor that connects Lorn - the mainland region opposite those islands - to Dunkeld in Perthshire, where Airbertach's son Cormac was the Bishop in the early twelfth century. Tradition connects the MacMillans with a number of different places in the areas associated with Airbertach's kindred: Glencannel on Mull; Craignish in Lorn, Leny and Loch Tayside in Perthshire. See a map of these and other Clan MacMillan lands.

Bishop Cormac's son Gilchrist, the progenitor of the Clann an Mhaoil, was a religious man like his father; and it was because of this that he wore the tonsure which gave him the nickname Maolan or Gillemaol. The church origins of the MacMillans are reflected in the connection of some of the earliest "children of Maolan" to two religiously based clan confederations: the Clann GhilleFhaolain ("Devotees of St. Fillan") in Perthshire and Galloway; and the Clann GhilleChattain ("Devotees of St. Catan") in Ulster, the Hebrides, and particularly Badenoch and Lochaber. See a graphic of our progenitor's lineage.

Feuding with the Mackintoshes for the captaincy of "Clan Chattan" - the devotees of St. Catan - involved the MacMillans in defeat at the Battle of the Clans at Perth in 1396; and finished with the chiefly family’s near-extermination at The Palm Sunday Massacre of 1430. A survivor of the massacre, Alexander mac Lachlan, fled to Knapdale, where some of the clan had probably been settled since the mid-13th century; and the famous cross that he later erected there may well be a memorial to the family and lands he lost in Lochaber. The MacMillans' charter from the Lord of the Isles for their lands in Knapdale was said to have been carved in rock on the beach at the Point of Knap:

Alexander MacMillan is also remembered in Knapdale for the tower he built at Castle Sween - often said to be the oldest stone castle in Scotland - which he held for the Lord of the Isles in the 1470s. Following the demise of the Lordship of the Isles at the beginning of the sixteenth century, Knapdale was given by the crown to the Campbells, whose tenants the MacMillans thereafter became; and it was probably at this time that a son of the last MacMhaolain Mor a Chnap who remained loyal to the Lords of the Isles fled Kilchamaig in South Knap to re-establish a branch of the family in Lochaber, who became the Macmillans of Murlagan.

Followers of the Lord of the Isles and Lochiel, chief of Clan Cameron

The chief of the Camerons - the clan that had succeeded the orginal Clan Chattan as the lairds of Lochaber - let Murlagan and the neighbouring farms on Loch Arkaigside to the Macmillans for sword-service, and Clann 'ic 'illemhaoil Abrach ("Clan Macmillan of Lochaber") were among Lochiel's most important and loyal followers from the time of the last risings in favour of the forfeited Lords of the Isles in the middle of the sixteenth century, to the Jacobite rebellions of the eighteenth century. From Loch Arkaigside Macmillans settled further north on the mainland in Ferrintosh on the Black Isle, in Kincardine on Speyside, and particularly in Glen Urquhart where quite a large branch of the clan flourished in the eighteenth and nineteenth centuries.

Following the loss of Knapdale many MacMillans from there settled to the south in Kintyre, much of which remained MacDonald territory for a century or so before also falling to the Campbells. A branch of the clan who were minor lairds in Carradale - and from whom the sept of Brown are said to originate - moved to the nearby island of Arran; while other Knapdale and Kintyre MacMillans settled across the water on Jura, Islay and Colonsay. One of the branches of the old MacMillans of Knap, having been engaged in the cattle-droving business, was able to purchase the lease of part of the clan's old lordship from the Campbells; and in 1742 Duncan MacMillan of Dunmore was recognised by the Lord Lyon as "the representative of the ancient family of MacMillan of Knapdale"; i.e. as chief of the clan.

Meanwhile the Galloway branch of the clan had continued to grow, despite the loss of much of its original possessions for supporting the Douglases in their fifteenth century rebellions in association with the old Lords of the Isles. The clan became particularly numerous in the Glenkens, where their chieftains for many centuries were the McMillans of Brockloch and later of The Holm of Dalquhairn (where their descendants still live). McMillans from Galloway - as well as from Arran - settled in Ayrshire; and also in Glasgow and Edinburgh; where in in the nineteenth century they were to be joined by a mass of distant cousins from the highlands and islands who could no longer get a living from the land or from the wielding of the sword for which the clan were famous.

Their early history meant that the MacMillans, though an ancient and numerous clan, were by the 17th century split into branches within different parts of Scotland; most of whom had to become followers of the more powerful chiefs of the other clans that came to dominate those areas. So the remnants of the Lochaber Macmillans became attached to the Camerons - and are sometimes even considered as a sept of that clan - while the Galloway McMillans were closely associated with the Black Douglases. Even the later chiefs of the clan in Knapdale were obliged to follow the politics of their landlords, the Campbells - which in the Jacobite rebellions of the eighteenth century put them at odds with some of their own kin in Lochaber and Glen Urquhart who were staunch supporters of the Stuarts. Indeed, Clann 'ic 'illemhaoil Abrach formed a company of Lochiel's regiment in "The '45" and fought as such at the battle of Culloden.

When surnames became necessary - which in the Highlands of Scotland was not until the late 1700s, or even the early 1800s - some of these "children of Maolan" took, or were given, the surnames of the chiefs they followed. There are examples as late as the middle of the nineteenth century therefore of the same family using both the names Cameron and Macmillan; whilst other clan members are to be found recorded as Buchanans because of the "tradition" widely accepted in the eighteenth century - though now discredited - of the MacMillans being a sept of that clan. The Buchanan connection and claims probably derive from their inheritance in the fifteenth century of the estate of Leny in Perthshire which had been owned by a branch of Maolan's descendants; and this resulted in the Buchanans also claiming as their septs a number of names that an ancient Leny family tree show were really also descendants of Maolan. See more about septs.

See a page devoted to the Scottish diaspora and how MacMillans fit into it.

Much more information regarding Clan MacMillan and its history is available to members of Clan MacMillan International and some Clan branchs. If you are not already a member, see how to join and access these and more benefits. 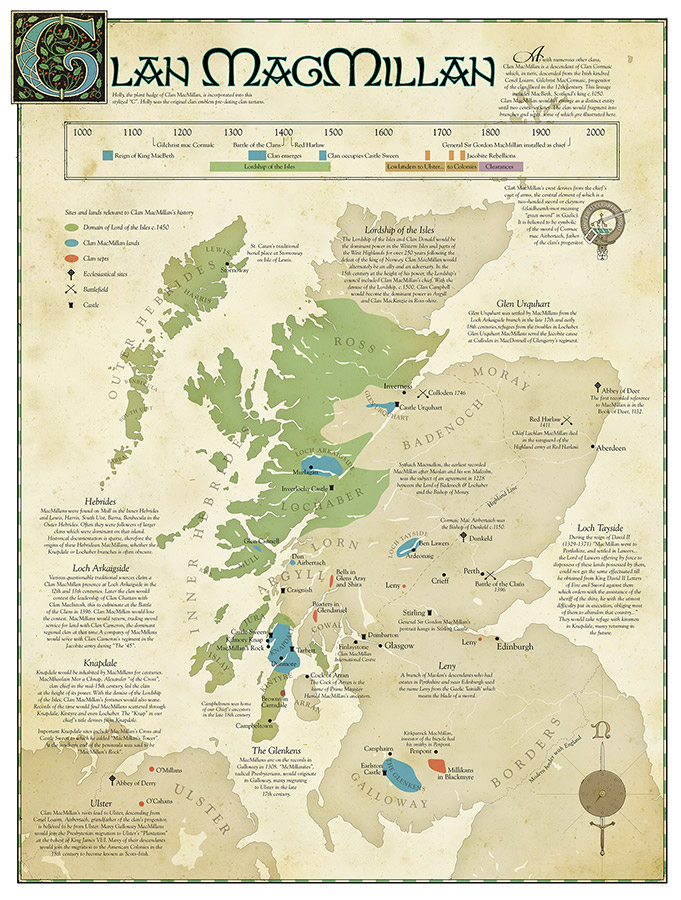 See an interactive map of Clan MacMillan lands in Scotland. This map is available for sale as an archival print. 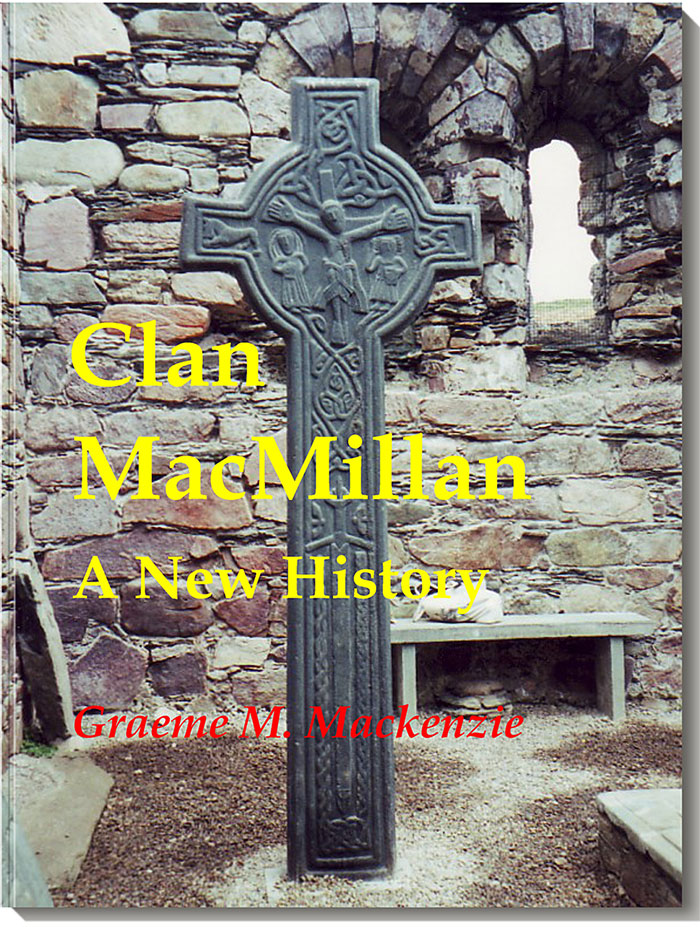 Clan MacMillan, a New History is now available. Download a PDF for details on the content, price and ordering information.