Scottish clans are replete with symbols, today's proud clansman bedecked in tartan and clan badges. However, these contemporary symbols were not commonly worn when Highland clans existed in the traditional sense, that is before "the '45". While Highlanders certainly wore a kind of tartan, uniform clan tartans representative of specific clans did not generally come into existence until the nineteenth century. Read more about Clan MacMillan's tartans. 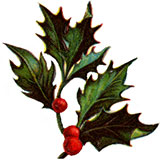 Well before badges and tartan identified a Highland clansman's affiliation, the plant badge was the only identifying emblem, this affixed to the bonnet. For Clan MacMillan this badge is holly. Other clans sharing the holly badge are Drummond, MacInnes, MacLean and Matheson, this being coincidental and not connoting any other relationship with Clan MacMillan.

Who first employed it in this context and when is not known. The earliest record of it being applied in reference to the Clan is the signet ring of Rev. John McMillan of Balmaghie (c.1699 - 1753). It accompanies the coat of arms matriculated in 1742.

Clan MacMillan's badge derives from the Chief's coat of arms. 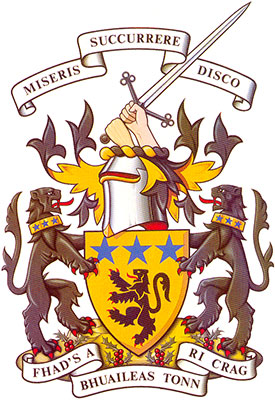 The Chief's complete coat of arms, referred to as the "achievement" (pictured at left) is the standardized composite of a number of symbols of Clan MacMillan including the motto and holly plant badge. A central element in the Chief's coat of arms is the "crest", the two-handed sword or claymore (claidheamh-mor - "great sword" in Gaelic).

This sword was said to refer to the weapon with which Cormac mac Airbertach (the "Great Bishop", father of Gilchrist, progenitor of Clan MacMillan) "performed some signal achievement, being a means of his first advancement". The MacMillan sept name Leny also makes reference to this sword.

Only the Chief may wear or display his coat of arms. Clanspeople wishing to display their membership of the clan and adherence to the chief wear a "crest badge" (pictured at right) consisting of two elements of this coat of arms - the motto and the claymore, enclosed in a circular belt.

A web page titled A MacMillan Armorial is devoted to more MacMillan arms matriculated in Lord Lyon's Register. More information. Clan historian Graeme Mackenzie, MA has covered the subject of Clan MacMillan symbols in more depth in some of his books. Most recently he published Clan MacMillan, A New History. To procure the book see this PDF for more information.

Coats of arms initially came into use by feudal knights and nobility in the 12th century, applied to banners, surcoats and shields as a way to distinguish oneself in battle or at tournaments. These symbols evolved to be applied to seals, tombs and ornament on architecture. Visually they also became more complex and standardized.

The Lord Lyon
Each European country has its own distinct approach to heraldry, with that of Scotland overseen by the Lord Lyon. His court grants and regulates Scottish heraldry as well as recognizing clan Chiefs (our present chief's father is an example) and clan tartans. His is the oldest heraldic court in existence, now a department of Scotland's government.